If you’re planning on taking your kayak for a ride, so that you can enjoy and use it, you’re going to first have to make it to the water.

Unless you live right by the waterfront, that’s going to require some transportation, and although it’s fairly straightforward, it’s not always easy.

Kayaks are pretty sturdy, but you still have to be careful when transporting the kayak. Some of them can be pretty heavy, so you have to know how to carry them properly to avoid any injuries.

And when transporting the kayak over a longer distance, you’ll likely have to find a way to carry it with your car, which needs to be done securely in order to avoid it falling off in the middle of the highway. 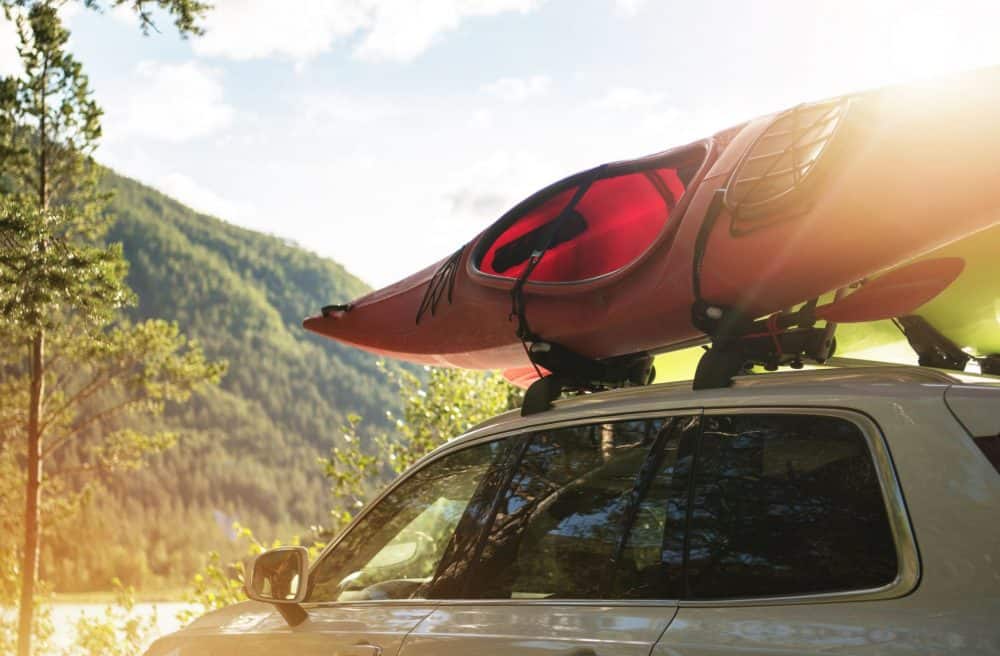 But don’t worry, transporting a kayak is fairly simple. It’s just important that you do it the right way, to avoid any accidents or problems.

So we’ll go through all of the basics, ensuring that you know exactly how to carry a kayak, how to transport it with your car (whether you have a car roof or not), and how to secure it so that there are no tragedies along the way!

How to Carry a Kayak

If you have a kayak, you’re inevitably going to have to carry it around when moving it from place to place.

As easy as it would be to just drag it, that would cause a lot of damage to it, so it’s important that you’re lifting it off the ground.

However, it’s also important to avoid any muscle injuries. As with everything, there’s a way of carrying it properly. Let’s take a look at how:

Carrying a Kayak by Yourself

If your kayak is especially big and heavy, you might struggle to carry it by yourself.

However, if it’s light enough for you to do so without too much of a struggle, this is how you should do it, step by step:

Carrying a Kayak with Someone

Carrying a kayak with the help of someone else is always a lot easier, as you have double the amount of hands!

With two people, it’s as simple as each person holding up one end of the kayak, so that you can carry it off the ground with ease.

If you have a third person, they can hold up the middle of the kayak, and then it would be even easier!

Transporting a Kayak with Your Car

If the water is too far away to simply walk over with the kayak, you’re going to need to transport it with a car.

There are several ways to do it, so we’ll cover the main three.

With a Roof Rack

If your car has a roof rack suitable for transporting a kayak, then the job is simple. All you have to do is get the kayak on top of it and secure it.

So for this point, we’ll just tell you the best ways to load your kayak onto the roof rack.

If you’re tall enough and strong enough, you can probably just lift the kayak up and prop it onto the roof rack, without a single issue.

However, if you’re not able to do this, these are a few of the methods you can use:

If you have someone to help you, loading a kayak onto the roof rack is a lot easier.

Each person can simply grab one end of the kayak, and then lift it high enough to prop on top of the roof rack, before securing it appropriately.

What If You Have Multiple Kayaks to Load

If you have enough space on the top of your car, you can transport more than one kayak at a time.

You can do this by using a roof rack that accommodates various kayaks, or by using stacker bars. These stacker bars will essentially prop the kayaks on their side so that they make more space, and there’s room for more of them.

However, if you’re doing this, make sure you have enough straps to secure them all! 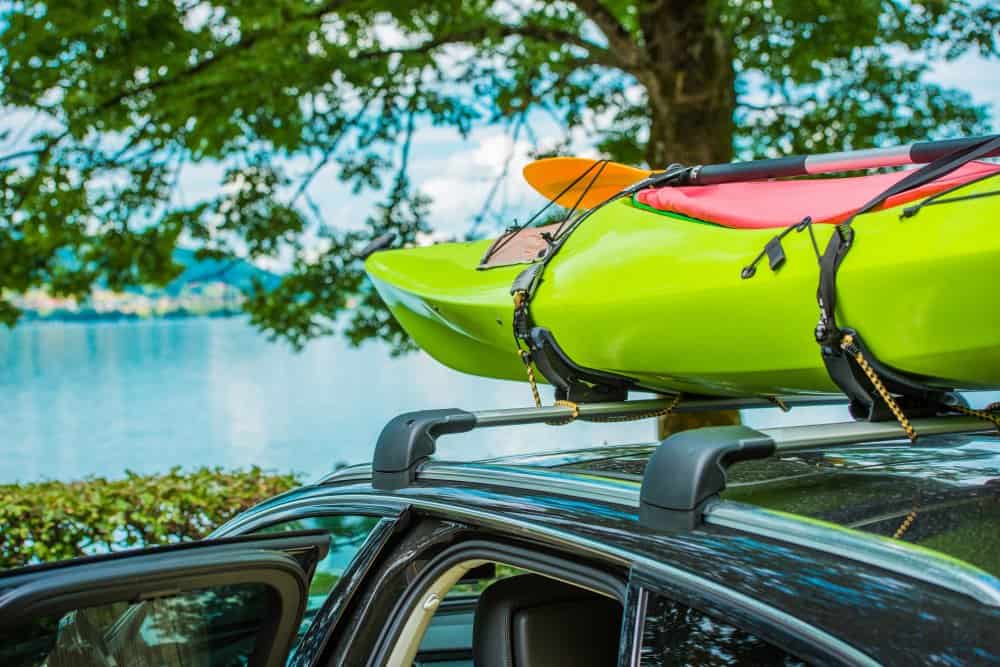 Without a Roof Rack

What if having to transport the kayak has caught you off guard and your car doesn’t have a roof rack?

Or what if you’re not transporting your kayak very often, and you, therefore, don’t want to invest in a roof rack, what can you do?

Well, there’s a way in which you can create your own make-do roof rack, for really cheap, and in a few simple steps.

For this, you will need two long pool noodles (yes, the long soft tubes that float and are used in kiddies swimming lessons), and a cam buckle or ratchet straps (these are easily found in hardware stores, get a few so that you have enough to secure everything properly).

Once you have the materials, let’s go ahead and walk you through the process:

With a Kayak Trailer

If you don’t want to drive around with your kayak on the car roof, you can always use a kayak trailer (if you have access to one, of course).

It’s slightly easier in the sense that you don’t have to lift the kayak too high off the ground in order to place it in the trailer, so it’s a lot easier to load up and secure.

You can also carry a lot of extra stuff and gear, depending on the size of the trailer.

The only downside is that you have to have the trailer in the first place, and you have to be aware of it when driving and parking! 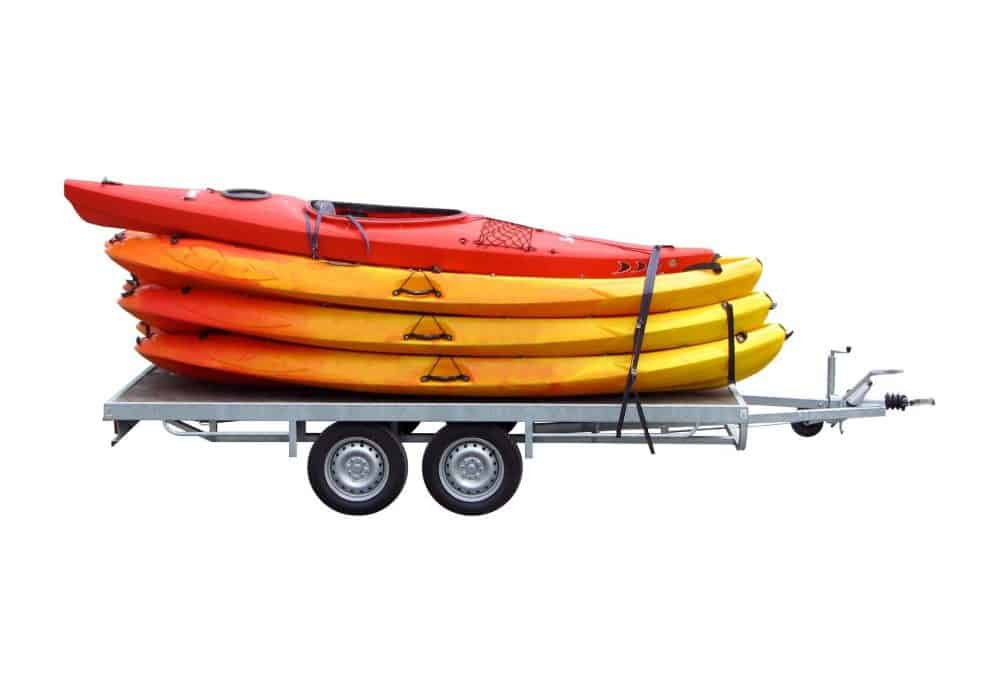 How to Tie Down and Secure a Kayak

Okay, so with all the different ways of transporting a kayak that we’ve talked about, we’ve mentioned that you need to tie down and secure the kayak. So how exactly do you do that?

Ratchet straps and cam buckles are the best way to do so. You won’t have to know any specific knots or methods.

You simply secure the kayak by using the straps and pulling them through the buckles to cinch them down.

Here are some tips and tricks when tying down and securing a kayak:

There are many different ways of transporting your kayak, so it ultimately depends on the ones you have available.

Carrying a kayak appropriately is important in order to avoid any injuries. And the same goes for loading a kayak onto the transportation method.

If you’re using a car, you can transport the kayak on top of a roof rack, or in a trailer. (Or if the kayak is small enough or inflatable, you can just place it inside the car).

How do you transport a kayak without a roof rack?

If you don’t have a roof rack on your car, it’s not the end of the world. There are other ways of safely transporting your kayak to your destination!

Here are the main ones:

What is the best way to transport a kayak?

If you’re going to be transporting your kayak on a regular basis, or often enough, then the best way to do so is by installing a roof rack on your car that is suitable for transporting kayaks.

There are different types of roof racks that you can look into, and some of them come with integrated methods of loading the kayak onto them, to make the job even easier. They vary in the price range and feature different commodities, so there’s a lot to look into!

How do you transport a kayak by yourself?

Transporting a kayak by yourself is a little bit more of a challenge, but perfectly achievable.

The main two things you need to know how to do are how to carry the kayak, and how to load it onto whatever method of transportation you’re using.

How to carry a kayak by yourself:

How to load a kayak by yourself: